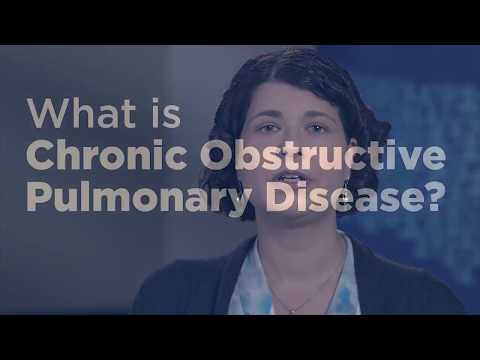 My name is Lisa Postow and I am a program officer in the Division of Lung Diseases at NHLBI, the National Heart, Lung, and Blood Institute.

COPD, short for Chronic Obstructive Pulmonary Disease, affects millions of Americans. Approximately 16 million people over the age of 18 are diagnosed and it is estimated that millions more have COPD without even realizing it. Most – but not all – people with COPD either smoke or used to smoke. But 25% of COPD cases are due to other factors, such as genetics or environmental exposure. Annually, about 150 thousand Americans die from the disease. At NHLBI, we are committed to raising awareness of COPD so that people who are at risk for COPD or are in the early stages can get help earlier and get back to doing the things they love. COPD puts a tremendous burden on people with the disease and their loved ones. It can affect quality of life, causing people to not be able to do everyday tasks and stop socializing. It also costs the health care system billions of dollars.

But not everyone is aware of COPD, and there is a lot about COPD that people don’t know. As the name suggests, COPD is a chronic obstruction of the lungs. Lung obstruction means you have trouble breathing. In healthy lungs, airways and air sacs are elastic or stretchy. When breathing in, each air sac fills up with air like a small balloon. When breathing out, the air sacs deflate and the air goes out. For people with COPD, less air flows in and out of the airways because of one or more of the following: Either the airways and air sacs lose their elastic quality; or the walls between many of the air sacs are destroyed; or the walls of the airways become thick and inflamed; or the airways make more mucus than usual, which can clog them.

The easiest way to understand how a person with COPD feels is to try breathing through a straw. COPD is sometimes also called Emphysema or Chronic Bronchitis. Both of these obstruct the lungs, but they do it differently. In emphysema, the walls between the air sacs are destroyed, and the air sacs lose their shape. This means the lungs don’t work like they should. In chronic bronchitis, the airway lining becomes swollen and inflamed, and a lot of mucus is produced. Most people have a combination of both emphysema and chronic bronchitis. COPD is a slowly progressing disease and often people don’t realize they have it until it’s already severe. As the disease gets worse, symptoms usually become more severe. And when symptoms are mild, they may not be noticed right away and people may adjust their lifestyle to make breathing easier.

For example, taking the elevator instead of the stairs or resting more often. Symptoms of COPD include shortness of breath or breathlessness, excess mucus production, wheezing, and a constant cough, which is sometimes called a smoker’s cough. Often people think these are signs of aging or being out of shape. However, extreme shortness of breath is not usually a sign of typical aging. If COPD is left untreated, it can lead to severe limitations to quality of life.

But COPD is highly treatable and when managed properly, symptoms can be greatly relieved and those with COPD can enjoy an improved quality of life. That’s why it is important to learn about the signs and symptoms so we can recognize them early and talk to a health care professional to find ways to manage it.  You can learn more about COPD on our website at COPD.nhlbi.nih.gov.